All visitors at Bok & Blueshuset can enjoy a fantastic photo exhibition by Pertti Nurmi, Board member of the EBU. Pertti was the editor-in-chief of the legendary Finnish Blues News magazine for almost a decade in the 1980s. After 40+ years of blues photography, Pertti’s photo archives are unique even internationally. The photos were mostly taken at the major music festivals in Finland like the Pori Jazz festival, Lakeside Blues festival and Rauma Blues festival, etc. Hundreds of Pertti’s shots have been published in the Finnish Blues News and other magazines, and his photography artwork has been on display e.g. in New York City and in Hollywood. A sample of some 120 Blues shots will be on display at the entrance level of Bok & Blueshuset starting from 22 June and running during the European Blues Expo, until the end of August 2014. 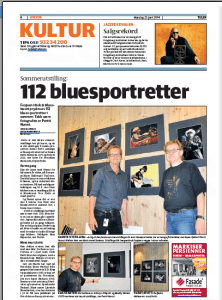