The 2nd  European Blues Expo will have its grand opening at the prestigious Bok & Blueshuset library in Notodden (Norway) on 31 July, and the Expo will be on display thereafter through August 2014. The exhibition will showcase the various activities organized by the European Blues Union like the European Blues Challenge (EBC), the Blues Market, and other cultural events associated with today’s lively European Blues scene. There will be a photo exhibition by international photographers, Pertti Nurmi (Finland), Alain Hiot (France), Sylvie Bosc (France), Roser I. Valls (Spain), SKAttomaTTO (Italy), Charlie Hussey (Ireland), Aigars Lapsa (Latvia), Morten Gjerde (Norway), Carme Barrera (Spain), Fred Delforge (France) and Roald Jungård (Norway). The Expo will also cover loads of information hosted by members of the European Blues Union dealing with European Blues festivals, magazines, musicians, radio shows, record labels, etc. Film footage recorded during the four past editions of the European Blues Challenge (Berlin, Toulouse and Riga, 2011-14) will be provided by Bad Music Blues from Barcelona. Bok & Blueshuset and Europas Blues Senter in Notodden will provide the logistical support as the 2nd  European Blues Expo will become part of the permanent Blues legacy to be housed at the Library. The event is also supported by the legendary Notodden Blues Festival. 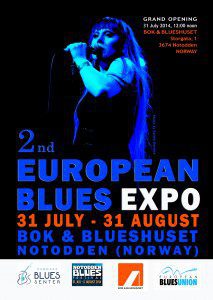