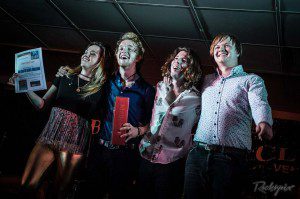 The UK Blues Federation (UKBlues) is pleased to announce that the band representing the UK at the 6th European Blues Challenge (EBC), organised by the European Blues Union (EBU) will be Red Butler, winners of the 2nd UK Blues Challenge on Saturday 24th October 2015 at the Boom Boom Club in Sutton, Surrey, jointly promoted and organised by Pete Feenstra Real Music Live and UKBlues. A panel of five judges chosen from across the UK blues community awarded contestants points for the four criteria laid down by the EBU – originality, instrumental talent, vocal talent and stage presence. Red Butler were the winners from a field also including Malaya Blue, The Brothers Groove, and The Katie Bradley Band. The 6th EBC will be held on 8th-9th April 2016 in Torrita di Siena in Tuscany, Italy and will see 20 European bands competing. Previous UK representatives at the EBC have been Ben Poole, 24 Pesos, Babajack, David Migden & the Twisted Roots and Laurence Jones. The recently created UK Blues Federation is honoured to have been appointed by the EBU to run the Challenge and is setting up a crowd funding campaign to assist with Red Butler’s costs in connection appearing at the EBC. Full details will be available soon on the UKBlues website – www.ukblues.org. Ashwyn Smyth – Chair of UKBlues – said: ‘ It has been a lot of hard work to pull both the selection process and the UK Challenge together, but it was all worth it! I am sure that Red Butler are going to do us proud in Italy next year. Our thanks go to Pete Feenstra for all he has done to make the Challenge happen and to the five judges who were faced with making some difficult choices. This has also been a great way to introduce the newly formed UK Blues Federation to the blues community in the UK and we have many plans for the future including, we hope, seeing a UK representative at the 2017 International Blues Challenge in Memphis. “We hope that many people will want to join UKBlues and help to support us in what we are doing and they can do so by going to our website where there are details of membership types and how you can join.” Alex Butler of Red Butler – www.redbutlermusic.co.uk – said: ’There is huge exhilaration amongst the band at winning the UK Blues Challenge. We put our hearts and souls into the gig against stiff opposition. The immediate reaction from the crowd told us this was something special from the word go. We are thrilled to have a major European event in the calendar for next year.”