Letter to the EBU by Eric “Slim” Zahl, winner of the 6th. European Blues Challenge 2016

Eric “Slim” Zahl has sent us this letter about his feelings after winning the last EBC: 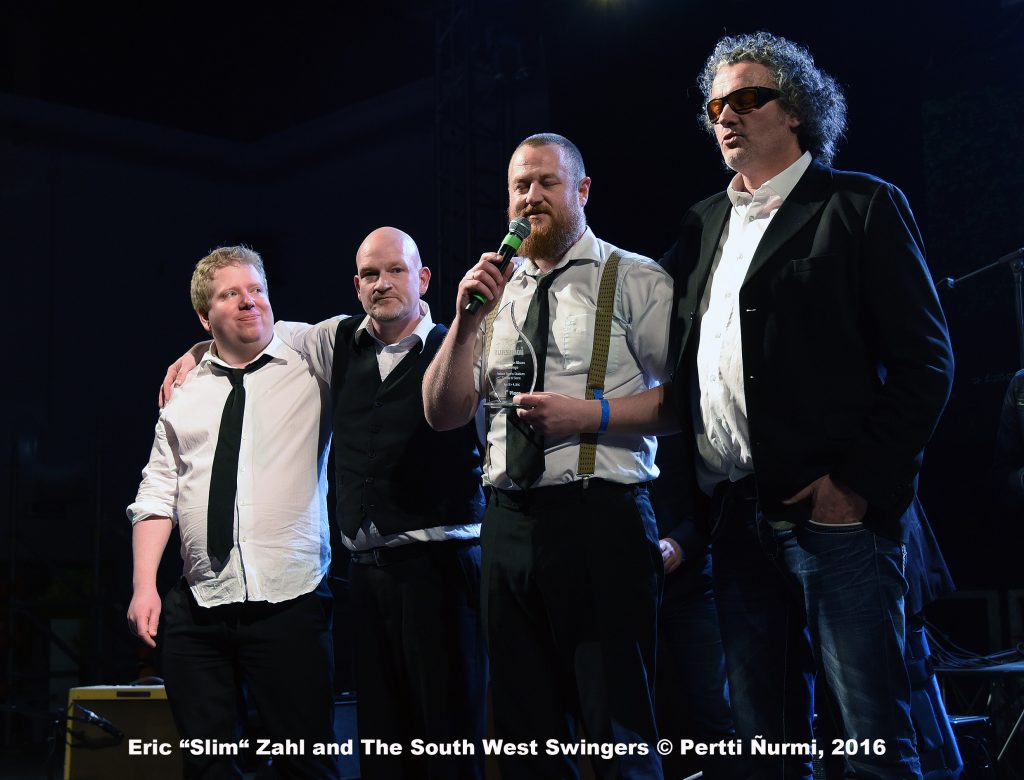 Little did we know, when we entered the 2016 European Blues Challenge (EBC), what a great experience this should prove to be for our band… Already a year earlier, in 2015, the band started their preparations – should the possibility of representing Norway in the EBC surface. Eric visited Brussels (host city for the 2015 EBC) to make mental notes on how Eric Slim Zahl & the South West Swingers might showcase their band in the best possible way on stage if there ever was OUR band who got the opportunity of playing in the EBC. Eric was also in Brussels to possibly connect with any booking agencies or organizers in Europe, to broaden the band’s horizon concerning touring outside Scandinavia and Great Britain, countries the band already had been touring for several years. The opportunity to represent Norway in the EBC came sooner than expected, when Eric Slim Zahl & the South West Swingers was elected by a unified Norwegian blues community to be Norway´s act in the 2016 EBC in Torrita di Siena. Then the FUN began! The band stitched together a twenty-minute set (time limit set by the EBU), rehearsed and primed our songs to be best possibly prepared for the EBC. We wanted to show what Eric Slim Zahl & the South West Swingers are all about in this Challenge – about having fun, connecting with the audience and enjoying ourselves when we play. Visiting Italy, the Tuscany region and Torrita di Siena particularly, we instantly fell in love with the place. Combined with the excitement of participating in the EBC, the fantastic talent of all the bands representing their countries and the friendly tone among organizers and the different artists – made this an amazing weekend for us. The arena was great, lots of people and a great atmosphere! We feel that we were allocated the perfect slot in the time schedule for our performance – at 10 pm on the Saturday. Brilliant. The audience were sizzling and we really felt the love in the room! When you have twenty minutes to perform, your only concern is that something unforeseen will happen, like technical difficulties or breaking a string or something like that. Well, everything went perfectly and the rest is now history. We are incredibly humble when we refer to ourselves as the 2016 EBC Winners! We met so many great people, artists and bands in this Challenge and we highly respect all the different styles, talent and all the different ways to perform the blues. We made some new friends and we had absolutely the best time in Italy. Winning the 2016 EBC also means playing some of the biggest blues festivals in Europe. For Eric Slim Zahl & the South West Swingers, this means getting an instant foothold in the European blues scene, and a chance to promote our band and our music there! At the present moment, writing this, our band has played festivals in Belgium, Spain, Finland and Norway – and we’re also lined up for festivals in Denmark and Switzerland – on top of a pretty hefty tour of the various Norwegian blues venues that were already booked for 2016 before us entering the EBC. Playing the different festivals around Europe has been an amazing experience! Professionalism, kindliness, great people and characters, standing alongside great acts – and performing in front of thousands of smiling people, has left a hefty impression on our band – personally and musically. Eric Slim Zahl & the South West Swingers are also looking on a great next year and quite a few gigs are already confirmed for blues clubs and festivals in Europe. After winning the EBC, our band is also now in cooperation with a Dutch booking agency handling bookings outside Norway. Winning the 2016 EBC opened “a lot of doors” for our band, as you can imagine…

Thank you so much! You Are All South West Swingers!