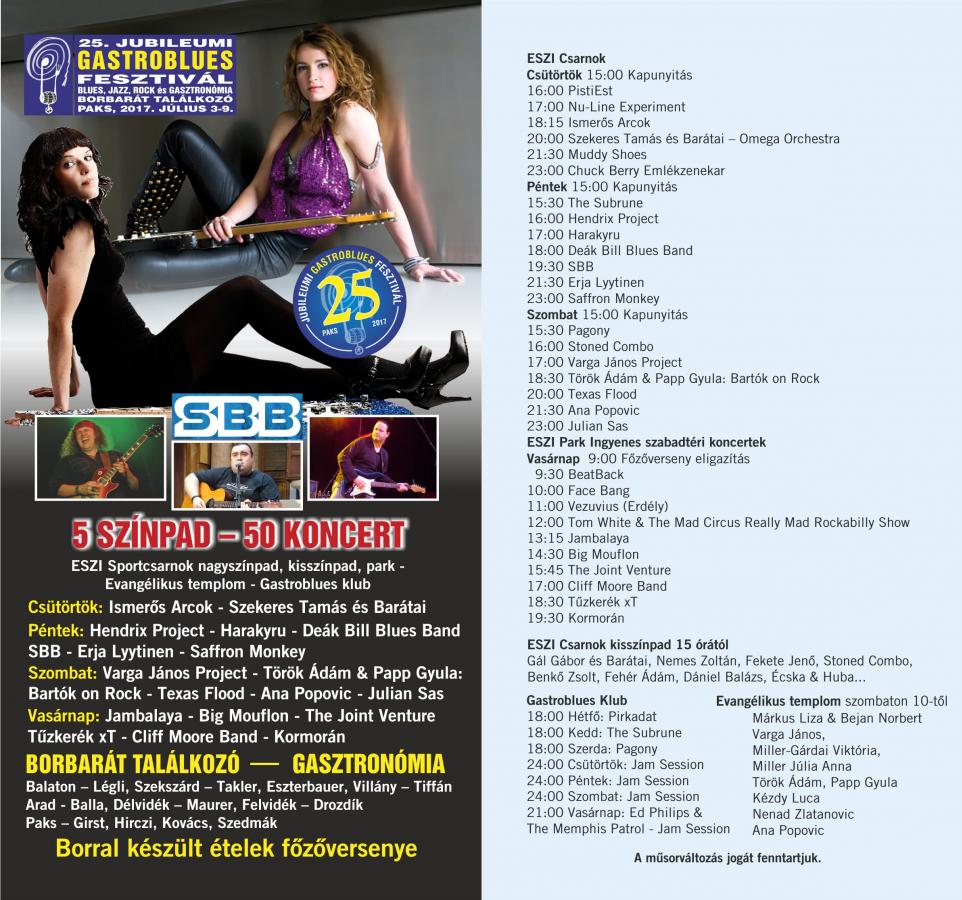 The Gastroblues Festival celebrated many jubilees last year, in 2012. Besides being the 20th Festival, the Gastroblues club has also celebrated its 25th anniversary, the wine club has become 15 years old, and at the end of the year, the 50th Gastroblues record was published as well.

What might the XXI. Festival bring in 2013? 21 is a lucky number for card players, but it might also bring luck for the Festival as well. It will be ensured by a number of excellent performers, including the brilliant guitar player Al Di Meola considered to be one of the best in the world, who has made his mark in various music genres in the past four decades, and who will bring us his latest show called Beatles and More. And what is this new show? Well, Meola was also touched by the work of the Beatles, who had a great influence on the music life of the 20th century. He claims to have shown interest towards the Liverpool quartet since he was a child, and he has been planning on remaking and performing their songs, however he felt that the time had only came now. The guitar player popular in Hungary recorded a few songs of the Beatles at the Abbey Road studio in London at the beginning of this year, and also some of his own pieces, as a tribute to the band. Visitors of the Festival will enjoy a unique experience at Paks, since the three musicians of Meola will be accompanied by the Hungarian Sturcz Quartet.

Many people might have noticed that there are only a few ladies amongst the performers of the Festival, even though there are many women in the world attempting to keep blues music alive. Dana Fuchs from the USA is not only the first overseas lady performer we welcome, but she is also the leading lady of the Off-Broadway musical Love, Janis about Janis Joplin.

The musical variety of the Festival will also be enriched by Collegium Musicum, the Slovakian progressive rock band of the 70s, which was also popular in Hungary. Besides their own compositions, they have remade pieces of classic music composers, such as Béla Bartók. Their musical style could be compared to Emerson, Lake & Palmer and the Hungarian band East. The band shall perform after a break of four decades, delivering a unique show not to miss for those who admire truly fine rock music.

Eric Sardinas is the daredevil of modern blues. His extravagant appearance, his worn, steel-body dobro-guitar, and his hoarse voice make him an outstanding singer-guitarist showman. He is able to switch over from his acoustic delta blues compositions into hard electric blues rock almost unnoticeably. On one hand, his tattoos, jewels and tough-guy looks qualify him for being a real macho, however it should not be forgotten, that currently he is considered to be one of the best blues musicians in the world.

The performance of the Italian guitarist Andrea Braido is also greatly anticipated. We had the chance to welcome Braido at the Gastroblues Festival two times already. In 2005 he brought us a Hendrix show, and in 2006 he appeared in the group Twin Dragons. The latter – as the name of the band suggests – arrived with two solo-guitarists, to the great delight of the audience. This year, the Braido formation brought along Fulvio Feliciano to be the “twin-guitarist”, who shall perform together with the singer and bass-guitarist Nathaniel Peterson. With his powerful voice, robust appearance and characteristic face tattoo, Nathaniel has been a memorable performer of the Festival seven years ago, and they are expected to deliver a special concert this year as well.

Hungarian performers will also enrich the program of the Gastroblues Festival. After several years, the Hungarian super group Boom Boom will play on stage agai

n, with Tibor Tátrai who has been said to be the best guitarist on many occasions, with the excellent drummer, Gergő Borlai, bass-guitarist György Szappanos, guitarist Tamás Mohai, and singer and guitarist Jamie Winchester. These members are well known for bearing great musical skills, and for bringing incredible vibes on stage when playing live.

The Varga János Project & Sturcz Quartet will introduce their new record on their concert, which will be full of surprises. The perfromance of Sonia & The Soulbreakers is also expected to be attractive for the audience. Sonia Zambrano is known to be the Peruvian Janis Joplin, and will sing now after a long break. The performance of the band focuses on the powerful voice of the singer, and on the massive orchestration of the trio. We have the pleasure to welcome Little G. Weevil (Gábor Szűcs), who was the winner of this year’s 29. International Blues Challenge festival organized in the United States (Memphis), in the solo-duo category. The “single band” of András Petruska will appear at multiple locations. Further Hungarian performers and formations include: Mojo Workings, Sonny And His Wild Cows, Tűzkerék xT, Rolls Frakció, T. Rogers, the Jazz Kaláka & Mihály Ernő from Transylvania, Joint Venture from Upper Hungary, and many more.

Naturally, the National Meeting of Wine Lovers shall also be organized having experts from historical wine regions, accompanied by gastronomic shows and charity cooking contests.